Video Pirates: My Girl's Mad At Me 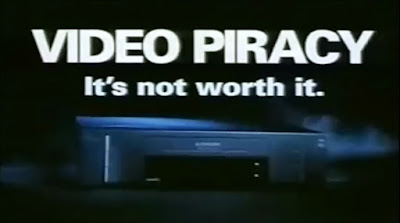 In recent months, I've discovered just how much I love ex-rental VHS tapes. More specifically, how much I love ex-rental VHS tapes distributed by Columbia TriStar. Not only do they come in lovely coloured boxes (and occasionally, the tapes themselves come in lovely colours too), but often you'll find some of the most arbitrary and unexpected goodies at the start of those things. It all started back in April when I acquired an ex-rental of the 1992 movie Accidental Hero, which came packaged with a surprisingly ominous advertisement for British Telecom, a cheaply-made preview reel assembled by the (now-defunct) Irish radio station Atlantic 252, and the dorkiest, most frugal-looking promo imaginable urging me to support my local rental store ("It could be a year before it's on satellite!"). The entire experience was like digging up a glorious little time capsule from a bygone age. It reminded me that my deep-seated love of VHS isn't just limited to the fascination in watching a collection of images fade and degrade with the passage of time, but for all the wonderful odds and ends you have navigate your way through before you get to the main feature - the uncanny dialing noises at the start of the tape (which were actually signals indicating where the video was to be cut during the manufacturing process), the emotionally scarring production/distribution logos, the thorough explanations as to what to expect from the certificate of my chosen title (sadly, Columbia TriStar didn't have the ones with Simon Bates doing the honors - I still titter like a school kid at his use of the term "sexual swear words"), the previews, the random ads (on some ex-rentals) and, of course, the portentous anti-piracy warnings. Going back to my childhood, I can recall the immense unease I always felt at having to sit through those cautionary spots at the start of Disney VHS tapes lecturing me about the evils of "Poor quality illegal video cassettes" and the importance of ensuring that I had purchased "A GENUINE COPY". They were relatively mild in tone, but the sternness of that voice-over coupled with the foreboding sight of a Disney VHS suspended above a sickening blue void was enough to make me very afraid as to what alien horrors masquerading as wholesome entertainment could potentially be making their way into my living room and damaging my video cassette recorder as we speak. The suggestion that not even something as reliable as a Disney video cassette could be automatically trusted to do what it said on the tin made the world seem just a little more precarious.

There came a point, around 1997, where the UK Columbia TriStar rentals all started featuring the "Daylight Robbery" anti-piracy film, in which a dissatisfied customer attempts to return a dodgy copy of Trainspotting to a particularly lippy market vendor, and which, compared to other anti-piracy warnings, went largely for the humour factor (some years later, this also popped up on the limited edition VHS release of the 2014 film Beyond Clueless, suggesting that it even holds a certain nostalgia for some). The vendor's sporadically witty rebuffs aside ("No trains in it either; I suppose that's my fault as well?"), I have gotten a little tired of seeing this one, although I am somewhat amused by the overall inconsequence of the scenario; for the extremely dour tones adopted by the announcer in cautioning me that "There's no comeback!", it's inferred that the customer only paid about £4.99 for his unwatchable copy of Trainspotting. It's annoying, sure, but somehow I think he'll live.

The anti-piracy warning lying in wait on the 1995 Billy Crystal comedy Forget Paris, by contrast, was a real find. Compared to the lightness of the "Daylight Robbery" film, this one feels borderline apocalyptic in nature, pulling out every stop to convince me that civilisation gets one step closer to teetering on the brink of collapse every time some thoughtless git buys a knock-off VHS cassette. It starts out wholesomely enough, with a husband setting off for work and kissing his wife goodbye, before announcing that he picked up that VHS tape their daughter Rebecca has been hankering for. We get our first sign of trouble when he admits that "It only cost a fiver from that bloke down the market", and his wife cheerfully responds, "Great, it's not even out yet!" Clearly, neither of them sees anything suspect or unkosher about this scenario. We then cut to the unwitting Rebecca watching the video while her mother tends to the garden outside. Turns out, the video Rebecca wanted comes with the most unpleasantly frenetic-sounding cartoon music, which is already enough to set the viewer on edge, but things take an even queasier turn as her innocent laughter is juxtaposed with onslaught of text flashing across the screen to warn us that there are unseen evils at work in the form of drug dealers, terrorists and organsied crime - all of which, we are told, benefit tremendously from your purchase of pirated video cassettes. At the climax of the film...honestly, I'm not sure what happens. Rebecca's ill-gotten video apparently conks out and she looks to her mother in distress, but that intense dolly shot makes it seem as if something far more dramatic is unfolding. Not to mention, the cartoon music fades and is replaced by the sounds of gunshots and people screaming. It's an awful lot of hoopla for what must, again, boil down to a minor annoyance as far as this family are concerned. A fiver blown on a faulty video tape and a little girl who is presumably confused and disappointed by the experience. But unlike "Daylight Robbery", this one really strives to hit the viewer where it hurts, in suggesting that their lack of vigilance may have catastrophic effect that extends way beyond a mundane living room blow-out, and that the day-to-day security with which our children live will certainly be the first thing to go.


The film is discomforting in the way it intersects the cozy domesticity of Rebecca's world with the sense of a potent destructiveness stirring just away from view, and the feeling that this force is in the process of infiltrating and corrupting the innocent souls who dwell within. At first I wondered if perhaps some inappropriate material had wormed its way onto Rebecca's video, and that this is what has rendered her so shocked and confused at the climax, but on closer inspection I don't think that's it. Rather, I think Rebecca has had some kind of premonition of the pending devastation, and of her parents' complicity in this, and when she looks to her mother, it's not a plea for assistance - no, it's a look of full-on accusation, as she realises just what kind of society the ostensibly respectable adults in her life are building for her. (Incidentally, it does seem a mite unfair that her mother should have to bear the brunt of Rebecca's fury when it was her sleazy father who actually purchased the insidious cassette, but I suppose her mother's nonchalant attitude makes her just as culpable in all of this.) Ultimately, the family only blew a fiver on this unwatchable VHS, but it's clear that Rebecca's world is never going to be the same again. She's seen too much amid that unsightly distortion, and there's no comeback. The world is burning outside and it's all your fault, you witless pirate-enabler. Having to face the accusatory gaze of the children you let down with your cheese-paring purchases is perhaps the cruelest punishment of all.

Of course, as we moved away from cassette-based media and into the age of digital downloads, piracy only became all the more prevalent in our daily lives - with the rise of the internet, it was no longer a matter of making your way to a lippy market vendor to blow £4.99 on a dubious copy of Trainspotting, but having instant access to whatever you wanted with just a couple of mouse-clicks, and all for free. Accordingly, the anti-piracy warnings became less entertaining and began to reek more and more of sheer frustration - for example, the Federation Against Copyright Theft's infamous "You Wouldn't Steal A Car" campaign, which always played as though it were competing in some kind of condescension Olympics (some might consider the "Rebecca" spot condescending, what with its flagrantly dramatic scare-mongering tactics, but at least it doesn't deploy an endless succession of "You"s throughout, subjecting the viewer to the unpleasant sensation of having a finger thumped against their chest with every beat). Honestly, the number of DVDs I encountered that on which wouldn't even let me skip the damned thing left me feeling very, very resentful of the campaign, not least because my reward for buying a DVD lawfully was now all-too typically to be treated like a prospective criminal. Which does ultimately call to mind the probable futility of all of these efforts - they were rather a matter of preaching to the converted, were they not? Who was going to see them other than those who already bought or rented their media the legitimate way? But then I suppose the purpose of those early ads was never to show dodgy media buyers the error of their ways, but to create distrust among the law-abiding as to what could happen if they strayed off the branded path. It's a scary world out there. So stay inside and stick to products with our genuine label hologram.
Posted by Scampy at 16:26

Email ThisBlogThis!Share to TwitterShare to FacebookShare to Pinterest
Labels: advertising space, childhood trauma, do you know where your children are, scary monsters and super creeps, vhs