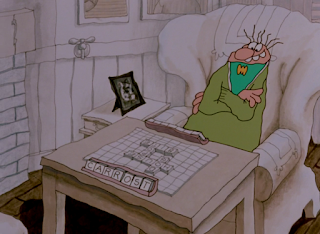 When it comes to animation depicting the horrors of nuclear war from the perspective of a married couple who are seemingly unaware of the depth and the direness of their situation, Richard Condie's tragi-comic short The Big Snit is probably the second most famous of its kind, surpassed only by Jimmy T. Murakami's 1986 feature adaptation of Raymond Briggs' graphic novel When The Wind Blows.  Both films are intensely heart-breaking, although Condie's short approaches the subject with a decidedly playful, off-the-wall lunacy which contrasts with the sombre realism of Murakami's haunting masterpiece.

Produced by the National Film Board of Canada in 1985, The Big Snit is also a strong contender for the most celebrated animated short of all-time upon the subject of nuclear devastation, rivaled only the 1956 film A Short Vision by husband and wife team Peter and Joan Foldes.  Acclaimed upon release, it went on to win a multitude of awards, including the Hiroshima Prize at the Hiroshima International Film Festival in 1985, and was nominated for Best Animated Short Film at the 58th Academy Awards in 1986 but lost out to Børge Ring's Anna and Bella.  In addition, Matt Groening has cited the film as the inspiration for the opening scene to The Simpsons episode "Bart The Genius"; in both cases, various character quirks and relationship dynamics are established through a particularly agonising game of scrabble.

The Big Snit sees the impending threat of nuclear war played against the petty squabbles of an anonymous suburban couple who have had their momentary fill of one another's company (cleverly, the title does not make it clear to which "snit" it is referring, although as the short progresses there can be no question as to which of the two conflicts best commands our attention and emotional investment).  The wife's habit of detaching her eyeballs from her body and shaking them in order to align her pupils is irritating the snot out of her husband, who in turn has a tendency to saw compulsively at household furniture.  He's also not above a bit of foul play in his tactics on the scrabble board.  The initial tension between the couple is established entirely through understated means - awkward silences, rattling eyeballs, the futile rearranging of scrabble tiles - to the extent that we're over a minute and a half into the short before any actual dialogue is heard.  Having reached an impasse with their game of scrabble, the two decide to take a breather - the wife in order to hoover around the bathroom, and the husband to indulge in a guilty pleasure by watching his favourite show, Sawing For Teens.  By the time they return to their game, tensions have merely escalated (not helped by the husband's attempt to take a stealthy peak at his wife's scrabble tiles), with the husband finally reducing his wife to tears by making one angry accusation about her eyeball rattling habit too many.

Due to their absorption in their personal woes, and to their mishap-prone cat gnawing through the television power cord, they miss an emergency broadcast warning that a nuclear missile is headed in their direction and remain largely oblivious to the intense state of panic that has gripped the world outside (the husband becomes aware of it at one point, but can only conclude that a parade is taking place).  The manner in which the film balances the (mostly) quiet, understated world inside the house with momentary glimpses of the apocalyptic insanity unfolding beyond it is perfect, underscoring the self-contained nature of the couple's conflict and creating a sense in which the fears and concerns of the outside seem ridiculous and insignificant compared to this latest strain on their relationship.  Condie's eye for quirky details is also a delight (among the figures attempting to flee nuclear apocalypse are Santa Claus, a chicken driving a "Palace of Poultry" van and Noah with an ark full of animals).  The banality of the couple's spat is flavoured with a wonderful dash of absurdity which perfectly encapsulates the capriciousness from which everyday conflicts originate and escalate.  And yet this conflict is also treated with a degree of tension and humanity which is totally lacking in the mindless panic outside.  Our assumptions that the couple might be able to put their problems into perspective if they understood the bigger picture are completely subverted - in the build-up to the nuclear blast, the outside world is treated as little more than an intrusive distraction which the couple are fortunately able to keep at bay.  The panic from the impending catastrophe is played almost entirely for laughs - even the initial announcement has a distinctly humourous edge, what with the newscaster taking the form of a decaying skeleton, the ludicrous advice (eg: to take cover beneath a refrigerator) and the language of the warning finally merging with that of an airline announcement; gags which nevertheless underscore the overwhelming futility of the situation.

The Big Snit takes an immensely touching turn in its climax, with the husband looking to make amends with his tearful wife by playing to her on an accordion, a symbol from the early days of their relationship which serves as a wordless reaffirmation of their enduring bond.  During the accordion performance and the couple's subsequent reconciliation the commotion outside is completely tuned out, as if anything beyond it ceases to matter.  Only when the cat, apparently having had enough of being on the receiving end of so many accidents, motions to be let outside and the husband dutifully reaches for the door knob, does the chaos of the outside world finally permeate the internal world of the household, a few rumbles and an ominous white glow seen through the keyhole indicating that the nuclear missile has landed.

The ending of the short, in which the couple find a newfound enthusiasm for life (ironically after dying) and decide to return to their game of scrabble, apparently oblivious to the fact that the world has just ended, is a real tearjerker, on a par with Jim and Hilda's final fate in When The Wind Blows, although once again there couldn't be more of a contrast in terms of how the two films handle what are essentially very similar conclusions.  By the end of When The Wind Blows, Jim and Hilda are no longer blind to the reality of their situation, although neither wants to admit this to the other (particularly Jim, who struggles to maintain his façade of optimism to the finish), and as both of them retreat feebly into their paper sacks, they now seem quite resigned to the inevitable.  The nameless couple of The Big Snit, meanwhile, are ultimately impervious to any significant changes in the outside world, to the extent that they can step out into an ethereal Heaven and care only about getting back to their shared experience over a game of scrabble.  Much as the impending global catastrophe has provided little more than the backdrop to the much more pressing issue as to whether or not this couple are able to overcome a frivolous butting of heads, so too their renewed bond and devotion to one another proves so overpowering that it transcends the horror of the situation.  In that sense, it is a triumphant story about basic humanity rising above the forces of chaos and indifference that threaten to destroy it.

Like When The Wind Blows, The Big Snit focuses extensively upon a single couple in order to emphasise the individual lives affected by global affairs, and in the process reflects much upon what it is to be human, from the individual quirks and habits which can sporadically cause us to lose patience with those closest to us, to the various smaller, everyday pleasures which ultimately make life endurable when so much else lies beyond our control.  It is over an entirely frivolous game of scrabble that the occurrences causing the disagreement between the couple are set into motion, and in the same entirely frivolous game of scrabble that the couple find the promise of a new day (albeit no longer in this world), having decided that whatever minor disputes or grievances they might have are simply not worth it in the end.


Availability: Watch The Big Snit on the National Film Board of Canada's website: http://www.nfb.ca/film/big_snit/
Posted by Scampy at 05:38