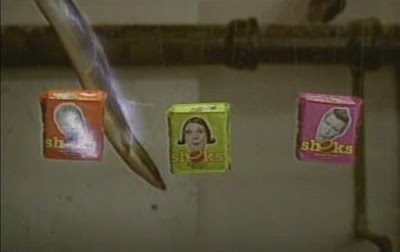 The Peugeot 406 Shark, in all his child-chomping glory, might have proved a notch too alarming for some viewers, but the peril he created seemed utterly conventional compared to the stars of the following campaign. For one thing, that shark at least remained in his natural habitat (maybe - just where in the world was that seaside resort supposed to be, anyway?). A far more nightmarish scenario would be if you were unwinding in the privacy of your own bathtub when suddenly an electric eel came slithering down the water pipes to make your acquaintance - which is exactly the scenario to which KP wished to liken the experience of ingesting their new snack foods product, Hula Hoops Shoks, in the early 2000s. The big hook of Shoks is that they had stronger, more intense flavours than regular Hula Hoops, and the tongue-in-cheek message of this campaign was that the only experience on Earth that could possibly prepare you for the sensation of applying a Shok to your taste buds is a close encounter with a live electric eel. Hence, the premise that Hula Hoops were releasing thousands of electric eels into the UK's waterworks as part of an ambitious publicity stunt. Cue eye-popping images of the elongated fishes slithering taps and sinkholes into kitchens and bathrooms and coming face-to-face with unsuspecting Brits as they went about their unsuspecting domestic routine. The whole thing sounds absurd as hell, and yes it was, but KP's twisted sense of humour landed them in slightly hot water when scores of parents wrote to the Independent Television Commission to complain about the effects these surreal images were having on their children.

Before we go into that, though, I want to point out that the creatures featured in this campaign are not actually electric eels. Electric eels, which are native to South America, are massive bruisers with beady blue eyes (also not a true species of eel, but rather a knifefish). If you found one of those in your bathroom then it would be a whole different level of horror. The eels seen here are harmless anguillids with shock effects added on through simple movie magic. That's probably not something that most people would appreciate creeping down their faucet regardless, but I wanted to bring it up.

So then, the controversy. This campaign upset a lot of people, many of them small children, who were so terrified at the thought of encountering an electric eel in their bathrooms that they developed an aversion to going in there altogether, in some cases leading to bed-wetting. According to this BBC article, the ads attracted 133 complaints. It's easy to scoff, but if I were a young child of five or six and I was exposed to these adverts, then I suspect I might still be impressionable enough to wonder whether or not it was real. The voice-over describing Hula Hoops' supposed stunt probably did sound appropriately authoritative to a child, no matter how ridiculous the notion. So I am sympathetic to the ITC's ruling that the ad should not be shown before 19:00, when there was a higher chance that small children might see it. Although not all of the people who objected to the campaign did so on behalf of small children - I seem to recall reading about the variety of responses to the ads on the defunct Ofcom archive many years back, and some viewers apparently complained on the grounds that they had a phobia of eels. It shouldn't surprise me to learn that enough people would squirm at the mere sight of an eel, given that they do bear a passing resemblance to snakes, and ophidiophobia is one of the commonest phobias out there. Still, if personal phobias were considered legitimate grounds for complaints, then I wonder how far I would get complaining about any ad in which I see someone sporting a bikini or a midriff (have I ever mentioned how repulsed I am by the sight of belly buttons?).

Not everyone who complained did so out of a distaste for the eels, however. Some, by contrast, felt only compassion for the featured fish. This Marketing Week article states that some viewers expressed concern about the welfare of the eels used in the campaign. That would be a legitimate concern, but it honestly never crossed my mind that any of the eels involved were harmed, as I suspect that the eels seen being dumped out of buckets and bulldozers weren't actually living. In the second ad in the campaign, we see a man handling an eel before flushing it back down the toilet, and that's definitely a dead eel he's holding. A live one would not be so inert.

As controversial as the campaign was, you'll notice that in the aforementioned BBC article the whole thing was basically upstaged by a ruling made at a similar time by the ITC regarding a campaign for Pot Noodle, in which the cheap and malodorous instant noodles self-described as "the slag of all snacks", and netted twice as much contention. The BBC article reports that that particular campaign received over 300 complaints (the Marketing Week article cites only 63, but there is a two-month gag between the two). Pot Noodle ended up having to change their slogan altogether when the word "slag" was deemed too offensive for TV at any time; the eels at least got to play around in the twilight slot.

Looking at the Shoks campaign beyond the context of the controversy, there is something terribly upsetting about these ads which I think has less to do with the surreal imagery of eels invading our bathrooms than with the overall sense of grimy desolation that pervades them. The mixture of the mundane and the absurd and the retro 1970s aesthetic make it seem like the kind of beguilingly warped gag you might have encountered in the BBC comedy series Look Around You (only less wry and more grotesque in nature), and like that series it conveys an unease about our collective cultural heritage and how it led us to the then-present. The initial ad in the campaign shows an elderly woman having an eel drop in on her in her tower block abode, and the situation is disturbing because it captures something of the corrupted journey of the UK's tower block boom; once a promise of the utopian future for post-war Britain, which envisioned people being brought out of the squalor of the slums and into the beauty of the skies, they wound up becoming dystopian nightmares unto themselves - imposing, monstrous symbols of degradation and isolation. With that in mind, I can accept the eel as a metaphor for the cold, creeping feeling alienation coming to engulf you within the supposed safety your own home, where all hope has gone down the plughole, and all that's left is the serpentine form of despair and squander staring you right in the face. Tonally, it might have been a bit bleak for the selling of snack foods.

Ads from this campaign are currently not available on YouTube (I guess they bring back too many bad memories), so to see them you'll have to go over to ad forum.
Posted by Scampy at 02:33