The Spooktacular New Adventures of Casper: 3 Boos and a Babe/Elusive Exclusive 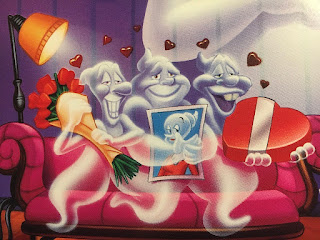 The Ghostly Trio are a close-knit group, and there's not a lot that could come between them, although the seductive allures of a bewitching banshee might be enough to put them at loggerheads. It's mid-February and the world hasn't quite gotten Valentine's Day out of its system, so now seems like an appropriate time to look at our first glimpse into the Trio's universal lovesickness for the ghoul with the lungs of steel. "3 Boos and a Babe/Elusive Exclusive" was the fifth episode of The Spooktacular New Adventures of Casper - it aired on March 30th 1996 and was later released on VHS by Universal Home Video, alongside "Poil Jammed/A Picture Says A Thousand Words."

So, in the series Casper attends a school for dead children (which is grim as hell but, unlike the 1995 movie, the TV series didn't dwell too hard on the morbid implications of its premise). Here, we see the origin of one of the series' long-running arcs - the Ghostly Trio's admiration for Casper's teacher, Ms Banshee, and their ongoing efforts to impress her. Technically, this wasn't the first time they'd encountered Ms Banshee - they were in the same room as her in the very first episode, "Spooking Bee", although I guess they can't have been paying much attention then. Despite their best efforts, the Trio never get anywhere with her, for Ms Banshee is regarded as seriously hot stuff among the ghosting community, and she's not going to settle for a trio of common or garden poltergeists when she could be dating the ghosts of dead celebrities. And she certainly seems to get around. In this episode, she's seen dating the ghost of Clark Gable, and elsewhere in the series she was revealed to have also been romantically involved with the ghost of Bob Marley. In addition, it seems that she's not adverse to experimentation with fleshies, because in another episode she attempted to fuck Dr Harvey.

Ms Banshee's not very into the Trio, although one thing they do have in common is their mutual disdain for Casper's scaring prowess, or lack thereof. Ms Banshee has summoned the Trio because she's concerned about Casper's academic progress and thinks that he requires a terror tutor. The Trio see an opportunity to get into the comely banshee's good graces by putting themselves forward for the task, although immediately they run into a problem, in that there are three of them and only one Ms Banshee, and as such this is probably not going to work out (and Banshee did indicate during her aforementioned pursuit of Harvey that she doesn't do polyamorous relations). Each of them manages to commandeer Casper for long enough to attempt to showcase how their own unique styles of scaring can help the friendly ghost to become a world-class specter. In all three cases, Casper incorporates the techniques poorly, and Ms B ejects them unceremoniously from her classroom. Eventually the Trio stop their infighting and figure that Casper is really to blame for making them all look bad. Meanwhile, Ms Banshee receives a call from a familiar suitor. 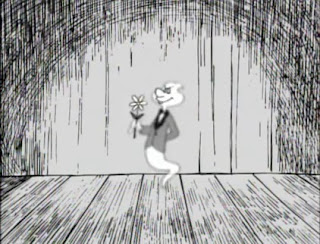 Something we would occasionally get earlier on in the series were these short pieces with visuals in the style of US artist Edward Gorey, which aesthetically made for nice change of pace. This skit, "The Whipstaff Inmates", takes us on a guided tour of each of the main characters, in wittily penned verses by Chris Otsuki. Again, this was the fifth episode, so by now we already knew full well who most of these characters were, but it's still fun to hear each of them receive their own poetry stanza in their honor. Presumably, calling them "inmates" is intended to make it sound as if Whipstaff is some kind of unconventional psychiatric hospital (which I suppose it is).

Actually, the title is somewhat misleading, as several of the featured "inmates" (including Spooky, Poil and Ms Banshee) do not live at Whipstaff. There is another character featured in this segment who's referred to only as "The Journalist" - he's the only one whom we hadn't already encountered in an episode proper at this stage, although his more formal introduction is coming up in the next story. His real name is Perry Piscatore, and he's basically the closest thing the series has to a recurring antagonist (unless you want to count Amber, although she's more of an antagonist for Kat specifically and tends not to get directly involved with the ghosts), albeit just barely - despite being framed as an important cast member in this particular skit, his appearances in the series are few and far between. As antagonists go, Piscatore is more of a bungling nuisance than he is a genuine threat; he's aware that Whipstaff is haunted and aspires to make a name for himself by proving the existence of ghosts to the world, but he doesn't know the half of what he's doing, so in practice he's really his own worst enemy.

Here's the poem in full:

The house called Whipstaff is the dwelling
folks in Friendship fear the most.
Let's go in and hear the telling
of who lives there, man and ghost.

The doctor treats ghosts by the hour
to turn them from their spooky games.
His patients do all in their power
to thwart his therapeutic aims.

The doctor's daughter finds it gaggy
living here with ghost and ghoul.
She says they're weird, but that's exactly
How schoolmates view her here at school.

The stinky one delights in making
smell-o-grams in deadly doses.
He leaves our noses sore and aching
with his own brand of halitosis.

The fatso ghost is always eating
every moment, night or day.
Since he's skinless, we must wonder
Where he puts it all away.

The Stretch, without a hint of error,
morphs up faces terrifying.
But none of these can match his terror
seeing Casper friend-ifying!

The journalist, with plans aggressive,
seeks ghosts on film, come snow or rain.
He goes to lengths somewhat obsessive.
His colleagues think him quite insane.

The spooky one is tough and scrappy.
For scaring fleshies he's a beaut.
But Poil keeps him far from happy
because she finds his nose so cute.

The pearl is sweet, but Spooky would rather
cast this beauty before swine.
He daily bears her thoughtless blather.
She's driving him out of his mind!

We find the teacher somewhat strident.
Her screams are good at breaking things!
We think you'll find the game is over,
When this not-so-fat lady sings.

So Whipstaff is the haunted manor
where all these ghosts and ghouls abound.
And we agree, with perfect candor,
It's the weirdest place around! 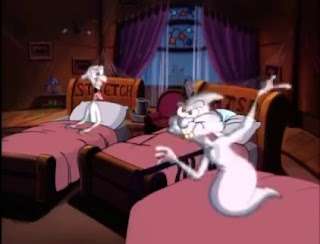 Investigative journalist Perry Piscatore crashes Whipstaff Manor with the intention of hosting a live broadcast exposing the ghoulish activity within. Neither Harvey or Kat appreciate the intrusion - particularly Kat, who is concerned that publicity of this magnitude would transform their abode into an unlivable media circus. The Ghostly Trio, by contrast, are delighted, not only by the prospect of getting to terrorise such willing fleshie prey, but by the possibility of becoming TV stars in the process. Casper, meanwhile, isn't fussed, because he understands why Piscatore's plan is doomed to fail - ghosts don't reflect light, and as such they cannot be photographed (the Trio are apparently unaware of this). After a failed attempt to warn the Trio, he figures that the best thing to do is to simply stand back and let nature take its course. Which it does - Piscatore is rendered a laughing stock and the Trio are disappointed to learn that their first-rate scaring went uncredited.

Airing in 1996, this predated the paranormal reality TV explosion that really look off in the 00s, with such shows as Ghost Hunters, Destination Truth and Most Haunted, although Fox were currently airing a series called Sightings, hosted by Tim White, which delved into an assortment of bizarre phenomena from an investigative news perspective. I took a brief look at one of their episodes on ghosts, and my immediate impressions were that it's no In Search of...(which I love, even if it is all hogwash). The whole premise of a live broadcast inside a haunted property had also been sent up a few years prior in the one-off BBC special Ghostwatch, which was actually a spoof, although it caused some controversy when it aired in 1992; it has since become something of a cult item.