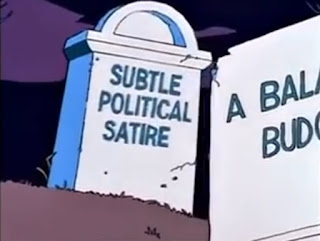 The amusing tombstones continued as usual, but their days too were numbered. At this point the writers had pretty much exhausted their options when it came to uncanny urban legends and macabre pop cultural digs, and so, following on from that American Workmanship tomb seen in "Treehouse of Horror III", most of the tombstones here have a conspicuously political slant.

Elvis - Accept It: The writers' weariness at having to bash out new tombstones year after year was by now becoming evident. This is basically a retread of a gag from the original "Treehouse of Horror", except that here the joke is made much more explicit, so that you can't possibly miss the point being made. I guess by now the world was growing weary of the "Elvis lives" conspiracy theory too.

A Balanced Budget: An allusion to another horrifying US tradition that happens to coincide with October time - that is, the start of the federal fiscal year.

Subtle Political Satire: Obviously this thing is as dead as the dinosaur. Although it does serve as a sardonic echo to the preceding tombstone.

TV Violence: Media violence in general was a subject of much hand-wringing and much congressional discussion in the early 1990s, as many attributed an apparent rise in violent crime to the availability of gory images in increasingly media-saturated times. The Television Violence Act of 1990, authored by Senator Paul Simon, gave the broadcast industry three years in which to enforce stricter standards regarding televised violence, although Simon claimed that the act was to be taken as an encouragement, not a requirement. By August 1993, the major networks had responded with no response, and Simon was threatening a much stricter crackdown. Meanwhile, V-Chip technology was being discussed as a means of filtering out violent imagery within the family home, and elsewhere in the entertainment industry, video games triggered a moral panic that ultimately led to the infamous congressional hearing on 9th December 1993 (at which Night Trap, one of the daftest, most ridiculously innocuous items ever devised by man, was held up as a textbook example of our increasingly degenerate society).

The joke at the start of "Treehouse of Horror IV" is very clever - here, we see TV Violence come under fire of a more literal nature, as the tombstone is desecrated by a barrage of bullets and blood starts to gush out of the holes. A statement, I suppose, that the moral outcry against TV violence was part of the same vicious cycle of mindless aggression that it posited itself as fighting against. Oh, and did we just say that subtle political satire was dead?